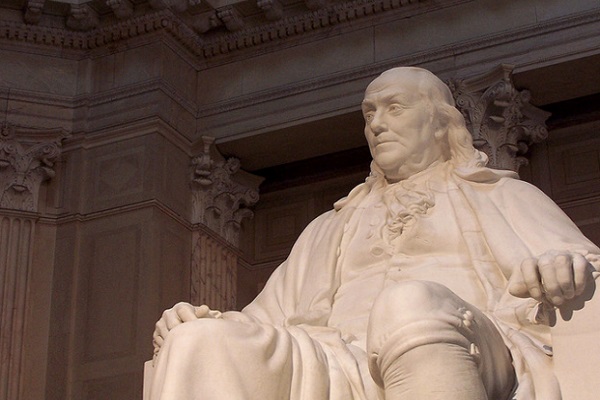 Much of what Franklin did and left as his legacy was directed to improve Philadelphia and the life of its citizens. He was the driving force behind many public projects such as the first public lending library and the first non- religious college. He helped organize Pennsylvania’s first volunteer militia, Pennsylvania hospital and the Union Fire Company.

Basic values and influence in politics

Benjamin Franklin had the ability to show simple values like hard work, honesty, tolerance and taking care of the community by working together and forming associations without ideologies or partisanship. His pragmatism worked well finding compromise in complicated politics.

He believed in the power of the middle class. He wrote his autobiography to remind his son, who was governor of New Jersey, of his humble roots.

Benjamin Franklin was the only Founding Father to have signed all three documents that freed America from Britain, the Declaration of Independence, The Treaty of Paris and the United States Constitution. He convinced the French to financially help America against Britain during the American Revolutionary War.

Benjamin Franklin is best known as one of the Founding Fathers and for his discoveries in electricity but he was also a newspaper pioneer. He was the 18th century most illustrious Pennsylvanian who was also known as a printer, author, inventor, diplomat, philanthropist, statesman and scientist. He was the best known American in Europe because of his experiments with electricity.

Franklin was a down to earth man who believed in the power of education as a way to self improvement. He was open to new technologies of his time. He believed that knowledge was power and knew the importance of newspapers to reach the masses and not only the educated and wealthy. He used cartoons and pictures in his Pennsylvania Gazette and Poor Richard’s Calendar to reach people who could not understand; information access to everyone regardless of education level or income.

When Benjamin Franklin died in 1790 he left the cities of Boston and Philadelphia 1,000 sterling pounds each, in today’s money the sum was worth from $100,000 to $125,000. Franklin required the money to be held in trust for 100 years after his death, after which the cities could use part of the money to establish trade schools or loans for apprentices. Not all the money could be withdrawn during the first century and the rest had to remain for another 100 year period. When the money became due 200 years after his death the Philadelphia fund was worth 2 million and the Boston fund 5 million. The Boston fund was worth more because the city withdrew less money in its first century.

Philadelphia used the fund to provide scholarships for high school graduates and Boston created the Benjamin Franklin Institute of Technology.