The Junto Club outgrew into the American Philosophical Society.

In the fall of 1727 Benjamin Franklin and a group of friends founded the Junto Club also known as the Leather Apron Club. The 12 members were tradesmen and artisans who met Friday evenings to discuss issues of morals, politics or natural philosophy. The club lasted 38 years. Franklin proposed that the group be formed of “ingenious men –a physician, a mathematician, a geographer, a natural philosopher, a botanist, a chemist, and a mechanician (engineer)”. 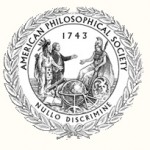 The American Philosophical Society was founded in 1743, “to promote useful knowledge“. Today it is known for its excellence in scholarly research and publications.

A branch of the Junto Cub was the American Philosophical Society created in 1743 and which still exists.

Members of the Junto club were avid readers and intellectuals involved in their individual improvement and that of society. The Junto was a launching pad for many public projects. Out of the meetings came proposals for the creation of the first lending library, the Union Fire Company, the University of Pennsylvania, volunteer militia, Pennsylvania Hospital among other public project.

The first public affair of the Junto club was the regulation and improvement of the city watch. They proposed taxing land owners in proportion to their property. Although the plan was not immediately executed it prepared the minds of the people and paved the way for the law that was adopted years later.

Franklin devised a group of questions to guide discussions at meetings and to provide a structure:

Members of the Junto Club

Among the original members of the Junto Club are: