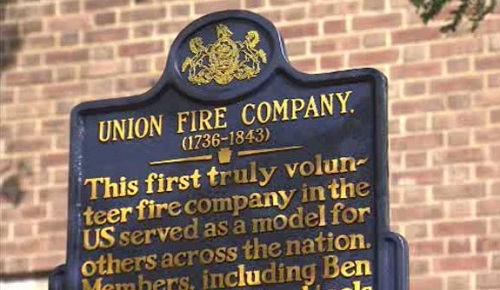 On December 7, 1736 Benjamin Franklin co-founded the Union Fire Company, also known as the “Bucket Brigade”. It was the first formally organized all volunteer fire company in the colonies and was shaped after Boston’s Mutual Fire Societies. The difference between the fires societies of Boston and Franklin’s Union Fire Company was that the former protected its members only while the latter the entire community.

In 1730 a fire started on a ship and spread to the wharf where all warehouses burned including three neighboring houses. This incident let Franklin to advocate for a community service to help extinguish fires to protect citizen’s properties. In 1733 he wrote an article in the Pennsylvania Gazette about the need of a society or group of organized citizens to prevent and protect property from fires. 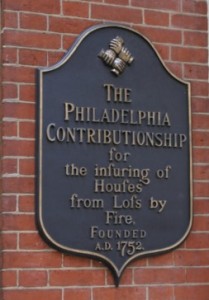 Philadelphia Contributionship. Founded by Benjamin Franklin in 1752. It is the oldest successful insurance company.

Junto members discussed ideas on how to organize volunteers. The first brigade was formed by 26 volunteers. Each member brought 6 buckets to carry water and 2 linen bags to rescue property. Members had different roles such as water management, property protection, training and fire prevention. Volunteers kept signing up and soon they had enough people to form additional brigades. Fire companies started forming and the results were immediate. In a time when fires consumed entire blocks of buildings the city of Philadelphia had not lost more than one or two houses at a time.

Fire engines, ladders and other equipment were financed by fines paid by members for absence at monthly meetings. The current Philadelphia Fire Department traces its roots to Franklin’s company.