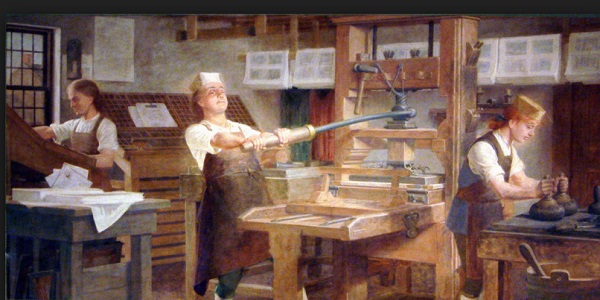 Since Franklin’s early years when he worked in Boston as an apprentice in his brother James’ printing shop, he always wanted to be his own boss and have the independence of writing for his public. It was in The New England Courant, a newspaper published by his brother, where he wrote his first article under the anonymous name of Silence Dogood. As he left Boston for Philadelphia he continued to pursue his dream.

In Philadelphia he met Governor William Keith who was impressed with Franklin’s writing abilities and ethics. In 1724, under his advice, Franklin traveled to London to purchase equipment and establish business relations. He spent 18 months in Britain acquiring skills that helped him build his fortune and reputation in America. But his trip to London did not go as planned. Governor Keith was to write letters of recommendation and a letter of credit to purchase press and types, paper and necessary equipment and supplies. To his surprise and disappointment the documents never materialized.

A Dissertation on Liberty, Necessity, Pleasure and Pain was Franklin’s first pamphlet published in 1725.

Stranded in London and with little money, Benjamin Franklin found employment at Palmer’s printing shop and lodging at Little Britain where he stayed for about a year. At Palmer’s he was employed in composing for the Second Edition of Woollaston’s “Religion of Nature Delineated”. This book argued that religious truths are to be gathered from science and the observation of nature and not through divine revelation. Franklin wrote his first pamphlet “A Dissertation on Liberty & Necessity, Pleasure and Pain”.

While in London Franklin attended plays and other places of amusement. To his fiancé, Deborah, he wrote only one letter letting her know he was not likely to return soon.

After almost a year working for Palmer he found employment under better terms at Watt’s Printing House and new lodging near his new job.

Franklin was getting tired of London and printing jobs did not pay enough to save for his journey back. He took employment with Thomas Denham, a Quaker tradesman, who loaned him the money to return.

His journey across the Atlantic Ocean to Philadelphia lasted almost 2.5 months. Back home Franklin continued working for Thomas Denham until he was able to repay his debt. In 1728 he found employment in Samuel Keimer’s printing shop. A year later he opened his own printing business and seized the opportunity to purchase the Pennsylvania Gazette from Keimer. Franklin had realized his dream, he established the reputation of the Gazette with news, letters, opinion from readers and his own editorials. Read more about the Pennsylvania Gazette

When he returned to Philadelphia a surprise was awaiting. His fiance Deborah Read had married a man named Roger Potter, but she was not happy. In 1727 her husband ran away to the West Indies escaping creditors. On September 1, 1730 Benjamin Franklin married Deborah Read entering a common-law agreement which protected them from bigamy if her runaway husband returned. Read more about Franklin’s marriage and children.

Franklin was paving his way to wealth.