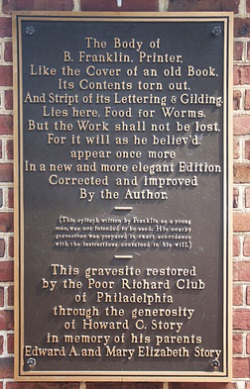 During his later years Franklin’s health gradually deteriorated. From 1785 to 1787 Franklin served as President of the Council of Pennsylvania. His last major appearance in public was during the Constitutional Convention which took place in Philadelphia from May 25 to September 17, 1787. As representative of the State of Pennsylvania he had prepared a speech before the signing of the Constitution but he felt too weak to deliver it. He let James Wilson, representative of Pennsylvania, read it for him.

Franklin had his first attack of pleurisy (lung infection or pneumonia) when he was 21. Eight years later he had a recurrence with an abscess on his left lung which left him susceptible to future attacks. At 44 he had his first gout attack. Later in life he suffered from repeated gout attacks and had a large bladder stone which confined him to bed. These disorders are associated with high uric acid related to diet, age, genetics and possible exposure to lead.

Benjamin Franklin died on April 17, 1790 when he was 84 years old. The cause of his death was empyema brought by attacks of pleurisy, which he had suffered earlier in his life.

Four days after his death his physician Dr. John Jones provided the Pennsylvania Gazette, a publication he previously owned, with an account of Franklin’s health during the last two weeks of his life.

He reported that 16 days before his death he was seized with high fever without particular symptoms until the 4th day when he complained of pain in his chest, cough and difficulty breathing. Five days before his death an abscess had formed in his lungs which suddenly burst. He continued to throw up. His lungs were continuously pressed by the abscess and was unable to breath. He quietly expired at about 11 o’clock at night.

On the 21st of April a funeral procession started at the State House. His procession was followed by politicians, scientists, printers, members of the American Philosophical Society and members of the College of Physicians (the first medical school in the country). Absent were President George Washington and members of Congress. It is estimated that 20,000 people gathered at the funeral, the largest Philadelphia had ever seen. The city had a population of 28,000 in 1790.

Benjamin Franklin was buried in Christ Church Burial Ground. His body rests next to his wife Deborah, who died 25 years earlier, and his son Francis Folger, who died when he was 4 from small pox.