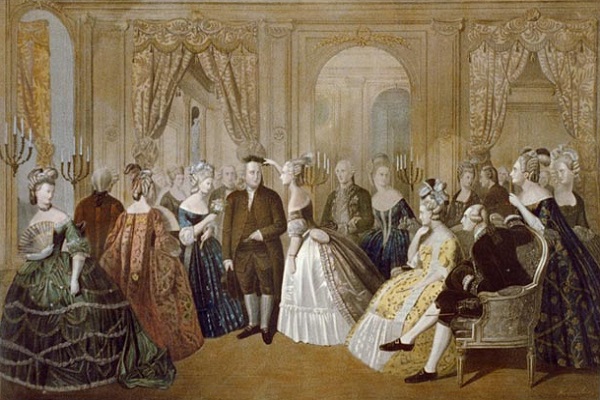 Franklin’s appearance at the Court in Versailles on March 20, 1778. King Louis XVI approved the Treaty of Alliance between France and the United States. Library of Congress.

The Continental Congress, formed in 1775 after the Battles of Lexington and Concord, sent Benjamin Franklin to join Silas Deane to gather support from France for its independence struggle. Franklin and Deane were joined by Arthur Lee to negotiate a Treaty of Alliance and Treaty of Amity and Commerce with France. The Treaties were signed on February 6, 1778 after which Franklin was elected minister plenipotentiary to France and the sole representative of America in France.

First ambassador of the United States

Benjamin Franklin was the first American ambassador received by a foreign government.

When war began and the Declaration of Independence was signed it was important to create good relationships with European powers. After Benjamin Franklin was appointed minister to France in 1778, John Jay was appointed minister to Spain in 1779 and John Adams to Holland in 1780. Admired by the French for his experiments with electricity, inventions and for his charming and humble personality, Franklin was a natural choice as ambassador. Even though he was not fluent in French and his grammar was not perfect the French complemented him. He was the first official diplomat and ambassador to the 13 colonies. His presence in Paris annoyed the British government. Between 1778 and 1782 France kept providing the Continental Army with arms, ammunition, troops, uniforms and naval support.

His goal was to maintain good relationship with the French government to keep their support in the war against Britain. There is no doubt that without French financial and military aid America could not have succeeded in its war for independence.

Franklin resided in the suburb of Passy, just outside Paris, in a house donated by a wealthy Frenchman and American sympathizer, Jacques Donatren Le Ray de Chaumont.  In Passy and Paris he frequented the rich and the politically connected who bankrolled the revolution. 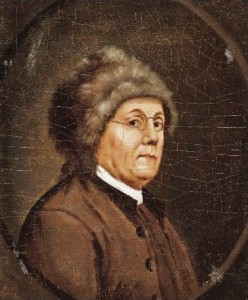 John Adams arrived in 1778 to replace Silas Diane who was charged of profiteering. Franklin invited him to nightly dinners with the rich and famous. Adams complained that Franklin was not doing his job as ambassador. Adams wrote in his diary “These incessant dinners and dissipations were not the objects of my mission to France”.  Adams failed to grasp the purpose of these parties, that French society combined politics with pleasure in a way that he was not accustomed. Franklin mingled in the atmosphere of high society, telling jokes and harmlessly flirting with women.

Adams grew jealous of Franklin as he was extremely popular with everyone. He complained that Franklin did hardly any work but amused himself in company of the wealthy. As Franklin recognized his popularity and the French culture, he won supporters for America and raised vast sums of money on credit from the French.

Franklin’s term as ambassador lasted until 1785 and was substituted by Thomas Jefferson. At his return he was made president of the State of Pennsylvania.