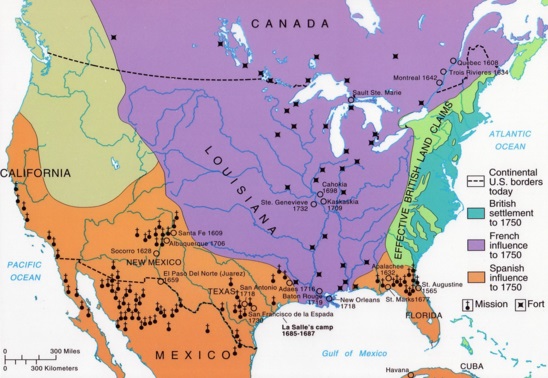 Territories dominated by France, Spain and Britain in 1750.

In the early 1740s Britain was at war with Spain and France which put British colonies in the Americas at great danger. Their ships were sailing American’s Atlantic coast with the opportunity to invade British lands. Benjamin Franklin was concerned about the defense of Pennsylvania. He was already a well known man in his community, he was clerk of the Assembly, created a lending library, the Fire Union Company, city watch and an institution of higher education (later University of Pennsylvania) in addition he was a successful entrepreneur. 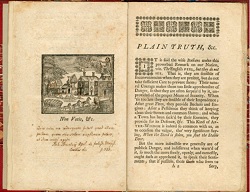 Plain Truth: or, Serious Considerations on the Present State of the City of Philadelphia, and Province of Pennsylvania, published in 1747.

Franklin worked with his friends at the Assembly to pass a volunteer militia law and make provisions for the security of the colony. He wrote and published an article named “Plain Truth” in the Pennsylvania Gazette. In it he outlined the need of union and discipline for their own defense. Soon after the pamphlet was circulated 10,000 people signed to volunteer and grouped themselves into companies and regiments that met every week for instruction. Quakers, who were the most influential group in the Assembly, initially refused to provide defense because it was in their religion to avoid wars even if it was only for protection. They eventually supported the creation of the militia.

The Philadelphia regiment chose Franklin as their colonel but he declined considering himself unfit for the post. The next project was to build a battery and mount it with a cannon. Franklin proposed a lottery to raise money to finance its purchase and approached business acquaintances in New York who help supply cannons.

By the time the war was over in 1748 Franklin was known all over Europe for his scientific experiments with electricity and inventions. Seeing the benefit to the community, the governor and council soon were consulting him on their plans for a more organized military.

The French Indian War, also known as the 7-year War was an extension of the war in Europe and lasted from 1756 to 1763. It was a struggle between the two world powers, England and France, to control colonies in the Americas.

During the French Indian War Benjamin Franklin was already a member of the Pennsylvania Assembly. Since the beginning of his service he proposed bills for defense which were passed by the Assembly in 1752, 1753 and 1754 but were vetoed by Governors Hamilton and Morris under the direction of Thomas Penn. The bills called for taxation on the Penn family estates to raise revenue to finance the militia which the Penn family, owner of the province, opposed.

By 1755 the French Indian War was in full swing. Franklin had helped supply horses, carriages and food to British troops. General Braddock’s army had been defeated and Indians had destroyed settlements and killed its residents.

The Assembly and the Governor felt obliged to provide defense to the frontier and at the insistence of Governor Morris, Franklin raised more than 500 men in no time. The northwest frontier where Gnadenhutten, a Monrovian settlement, was attacked had to be defended. Franklin had scant military experience but was asked to provide military leadership and was chosen as their commander. His son William was his aid-de camp. William had served in King George’s War against Spain.

Franklin left on a winter January day toward Gnadenhutten. After burying the dead the troops set about to collect fallen pines trees to build forts and secure nearby settlements. Fort Gnadenhutten was finished in one week and an additional two forts were built. This provided protection to the village and its farmers.

Back in the Assembly he remained the strongest advocate of an organized militia and taxation for defense. Franklin was sent to London as an agent of the Assembly to argue against a proprietorship government and for Penn estates taxation.