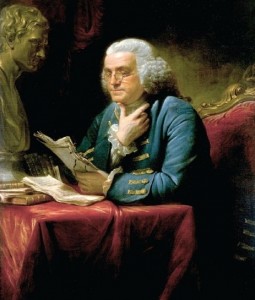 Benjamin Franklin was America’s scientist, inventor, politician, philanthropist and business man. He is best known as the only Founding Father who signed all three documents that freed America from Britain. Franklin is credited with drafting the Declaration of Independence and the American Constitution. He also negotiated the Treaty of Paris which ended the Independence War against Britain.

Born in a middle class family, he was the 15th of 17 children and the youngest son. With only 2 years of formal education he rose to the highest level of society. He never forgot where he started and always referred to himself as “B.F. of Philadelphia, Printer” as  in the opening of his will and testament. He had the talent of being at ease with any company, from tradesmen to scholars, merchants and the European elite.

Unlike the other Founding Fathers, Franklin began as an artisan, with minimal formal education, and was the architect of his own fortune. He was a self-made man representing American social mobility through frugality and industriousness. According to historian Perry Miller, Benjamin Franklin has become the most “massively symbolic” figures in American history. 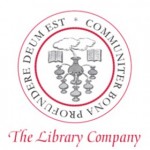 He strove to improve himself by cultivating personal virtues and taking on public projects for the benefit of society. One of his first public projects was to organize a block watch and raise money to pave and clean Philadelphia’s roads. His projects gradually became more ambitious and included creating pensions and insurance companies and providing welfare for widows. He helped build the University of Pennsylvania to educate middle class children. He raised funds to build the nation’s first hospital, Pennsylvania Hospital, for those who could not afford care and institutions for the mentally disabled.  The nation’s first lending library and the Union Fire Company were among his other contributions. This was long before governments began to provide services to their citizens. 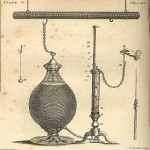 Benjamin Franklin was also a scientist. He proved by flying a kite that lighting was electricity and invented a rod to prevent it from hitting buildings. He invented bifocal glasses, charted the Gulf Stream, invented a clean burning stove and proposed theories on the contagiousness of the common cold. His approach was more practical than theoretical. His training as a craftsman made him more accomplished as an inventor. 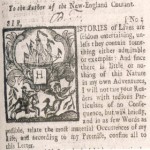 As a journalist his most important journalistic influence was his brother James who is considered the first fighter for journalistic freedom in America. Franklin wrote: “Printers are educated in the belief that when men differ in opinion, both sides ought equally to have the advantage of being heard by the public, and that when Truth and Error have fair play, the former is always an overmatch for the latter”. This legacy is framed and hanged in many newsroom walls in America. 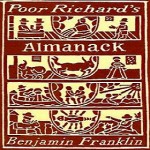 Franklin was an ambitious entrepreneur, disciplined and industrious, working hard until late at night. He nurtured his appearance and reputation “I took care not only to be in reality industrious and frugal but to avoid all appearances of the contrary”. He used the skills he had learned to open his own printing business. He acquired the Pennsylvania Gazette from his previous employer and created Poor Richard’s Almanac. 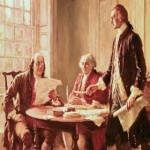 As a politician he was the first one to propose the union of the colonies for common defense. He was accused as a royalist but when the time came he stood up for freedom becoming one of the Founding Fathers. Franklin negotiated the end of the war with England and was one of the signers of the Treaty of Paris. He was chosen to represent the Union as the first minister plenipotentiary to France, the equivalent of today’s ambassador.

Benjamin Franklin genius is centered on the use of his network of business and social connections. He leveraged this network to the benefit of his variety of interests from science and politics to business and journalism. He was against slavery as an institution. For part of his life he held the usual prejudices against African Americans but he came to realize that they were “in every respect equal” to his own.

Benjamin Franklin died at age 84, on April 17, 1790. The cause of his death was empyema brought by attacks of pleurisy, which he had suffered earlier in his life. During his later years Franklin’s health gradually deteriorated. He suffered from gout and had a large kidney stone which confined him to bed.