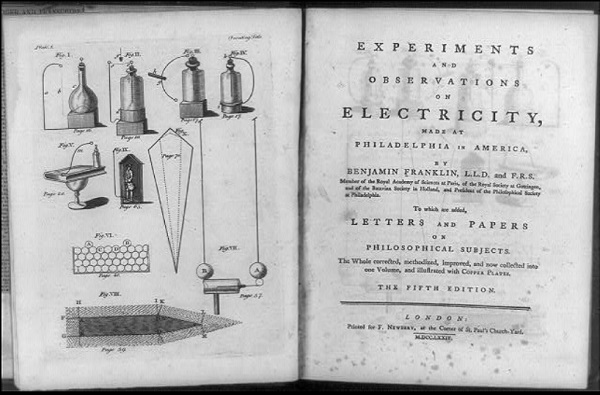 Diagrams of various electrical phenomena in  Experiments and Observations on Electricity. Library of Congress

Benjamin Franklin left an important legacy in electrical science and its useful application to mankind. The experiments published in “Experiments and Observations on Electricity Made at Philadelphia in America” proved the existence of positive and negative charges as well as the concepts of insulators and conductors. His work led to the invention of the lightning rod which saved buildings from being struck by lightning.

The first time the word “electricity” was printed was in 1646 by Thomas Browne in Pseudodoxia Epidemica. In it he describes static electricity produced by rubbing two objects. Further studies were conducted by Boyle, Gilbert, Gray, von Guericke and du Fay in magnetism and electricity. The invention of the Leyden jar in 1745 was a most significant advance. 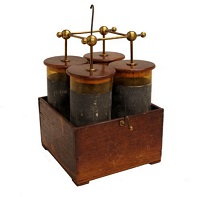 The Leyden Jar was named after the city where it was invented, Leiden (Leyden), Netherlands.

In 1746, while visiting his family in Boston, Benjamin Franklin met Dr. Spence who had arrived from Scotland. He showed Franklin electric experiments with the Leyden Jar which caught his attention and curiosity. When Franklin returned to Philadelphia the Junto Club had received a glass tube sent by Peter Collison from the Royal Society of London. After much experimenting he wrote several letters to Collison about his findings and success using it.

One of his first experiments was to give electrical shocks in the limbs of paralyzed individuals. He placed Leyden jars in their limbs sending electric shocks. Though initially beneficial, most people relapsed after several days. In his autobiography he wrote after his experiments with patients that he: “never knew of any advantage from electricity in palsies that was permanent”. Today doctors use electric impulses to stimulate muscles and prevent atrophy.

Another experiment and perhaps his most famous was drawing electricity from clouds and storing it in the Leyden Jar.

One of the letters Franklin sent to Peter Collison was on the Sameness of Lightning with Electricity in which he hypothesized that lightning was an electrical discharge. His letter was read to the Royal Society of London. Connoisseurs of the society laughed and ridiculed his findings and thought it was not worth being printed in their Philosophical Transactions. However, a member of that society, Dr. Fothergill considered his ideas of too much value and advised Collison that the paper was worth publishing. Collison gave the papers to Cave for publication in his Gentleman’s Magazine. It was printed separately from the magazine in a pamphlet with the preface written by Dr. Fothergill. 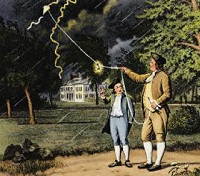 The kite experiment uncovered unknown facts about lighting and electricity.

Before Franklin had the chance to conduct his own experiment, two scientists in France, Dalibard and Delor, had tested his hypothesis proving his theories correct. They reported to the King of France that the extraordinary American has shown that you can draw electricity from lightning. Franklin was about to become the most famous American in the world.

Consecutive letters were published and were assembled into a book “Experiments and Observations on Electricity Made at Philadelphia in America” with the permission of Franklin. The presentation of his experiments was in the form of correspondence which gives minute details of his experiments.

What gave this book its instant celebrity was one of its experiments, drawing electricity from clouds. Benjamin Franklin was later made member of the Royal Academy of London and presented with the Gold Medal of Sir Godfrey Copley in 1753.

Franklin’s letters about his experiments with electricity

These are Franklin’s letters about his electricity experiments written to Peter Collison, Cadwadaller Colden and Jared Eliot in a span of seven years. These and other letters were compiled into  “Experiments and Observations on Electricity Made at Philadelphia in America”

»Letter from Benjamin Franklin to Peter Collison dated May 25, 1747