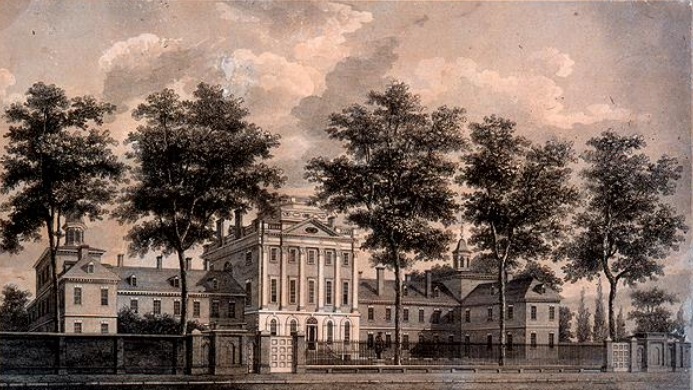 Dr. Thomas Bond, founder and trustee of the University of Pennsylvania. He volunteered his services from 1751 until his death in 1784.

The nation’s first hospital was the idea of Dr. Thomas Bond who approached his long time friend Benjamin Franklin to help him raise funds. His idea was to build a hospital “to take care of the sick, poor and insane who were wondering the streets of Philadelphia”. Philadelphia’s population was the fastest growing in the colonies. In 1730 it had a population of 11,500 and by 1750 its population had soared to 15,000. There was a clear need for accessible care.

Dr. Thomas Bond was a member of Franklin’s Library Company. He was a supporter of the the Academy of Philadelphia, which evolved into the University of Pennsylvania. He also helped establish the American Philosophical Society.

Franklin organized a petition and presented the assembly with a bill to create a hospital. The bill was received with skepticism by rural members of the Assembly as they thought it would only serve the city and not the entire colony of Pennsylvania. They would not support raising funds for a service to which they would not have access.

Pennsylvania Hospital Seal. The story of the Good Samaritan was chosen by Benjamin Franklin and Thomas Bond as the motif for the official Hospital seal.

Franklin proposed raising 2,000 pounds from private citizens and if able to raise the funds, the assembly would match the amount and an additional 2,000 pounds. It was the first time a matching grant was used combining public money and private donations. Franklin raised more money than the required amount and the assembly signed the bill which became law on May 11, 1751.

In 1752 a temporary hospital was opened in a house on High (Market) Street and Elizabeth Gardner. In 1767 Thomas and Richard Penn donated the adjoining property, giving the hospital the entire square between Spruce and Pine streets and 8th and 9th Streets.

The inscription “Take care of him and I will repay thee” was affixed as the hospital seal depicting the Good Samaritan story. 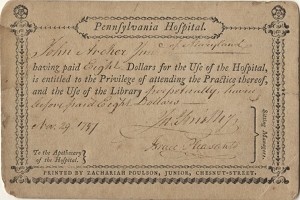 During the Revolutionary War the hospital played a major role and did not discriminate against British or Continental soldiers. Today Pennsylvania Hospital is a major teaching and clinical research institution.

Rules for admission and discharge of patients

The following rules were agreed by the managers of the Pennsylvania Hospital for the admission and discharge of patients:

1. That no patients shall be admitted whose cases are judged incurable, lunatics accepted nor any whose cases do not require the particular conveniences of an hospital

2. That no persons having the small pox, itch or infectious distempers shall be admitted until there are proper apartments prepared for the reception of such as are afflicted with those diseases and any such persons should be inadvertently admitted they shall forthwith be discharged.

3. That women having young children shall not be received unless their children are taken care of elsewhere that the hospital may not be burthened with the maintenance of such children nor the patience disturbed with their noise.

4. That all persons desirous of being admitted into the hospital (not inhabitance of Philadelphia) must before they leave the place of their abode have their cases drawn up in a plain manor and sent to the managers together with a certificate from a justice of peace and the overseers of the poor of the township in which they reside that they have gained a residence in such township and are unable to pay for medicines and attendance to which a answer shall speedily be returned informing them whether and when they may be admitted –all persons employed in drawing up their cases are desired to be particular in a enumerating the symptoms and to mention the patient’s age sex and place of abode with the distance from the city of Philadelphia.

5. That all persons who have thus obtained a letter of license to be received into the hospital must be there at the time mentioned for their reception and bring with them that letter and must likewise deposit in the hands of the treasurer so much money or give such security as shall be mentioned in their respective letters of license to indemnify the hospital either from the expense of burial in case they die or to defray the expense of caring them back to their place of abode and that they may not become a charge to the city.

6. If several persons not excluded by the proceeding exceptions are applying when they cannot be received with exceeding the number allowed by the mangers to be entertained at one time in the hospital the preference will be given when the cases are equally urgent; first to such as are recommended by one or more of the contributors members of this corporation residing in the township to which the poor persons belong: secondly to those who stand first in the list of applications. But if some cases are urgent and others can admit of delay those with the most urgent symptoms shall be preferred.

7. Not withstanding such letters of license if it shall appear by personal examination of any of the patients that their cases were misrepresented and that they are improper subjects for the hospital the mangers shall have the power of refusing them admission.

8. That at least one bed shall be provided for accidents that require immediate relief.

9. That if there shall be room in the hospital to spare after as many poor patients are accommodated as the interest of the capital stock can support the managers shall have the liberty of taking in other patients as such reasonable rates as they can agree for and the profits arising from boarding and nursing such patients shall be appropriated to the same uses as the interest money of the public stock provided that no such persons under pretense of coming to board in the hospital shall be admitted unless on the first application made on his behalf a certificate be produced from the overseer or overseers of the poor of the township in which he lives of his having gained a residence in the said township and unless sufficient security be given to the mangers to indemnify the city and hospital from all charges and expenses whatsoever occasioned by his removing hither.

10. That those who are taken into the hospital at a private expense may employ any physician they desire.

11. That all persons who have been admitted into the hospital shall be discharged as soon as they are cured or after a reasonable time of tryal are judged incurable.

12. That all patents when cured sign certificates of their particular cases and of the benefits they have received in this hospital to be published or otherwise disposed of as the managers may think proper.

13.That no patient go out of the hospital without leave from one of the physician’s or surgeon’s first signified to the matron that they do not swear curse get drunk behave rudely or indecently on pain of expulsion after the first admonition.

14. That no patient presume to play at cards dice or any other game within the hospital or to beg anywhere in the city of Philadelphia on pain of being discharged for irregularity.

15. That such patients as are able shall assist in nursing others, washing and ironing the linen, washing and cleaning the rooms and such other services as the matron shall require.