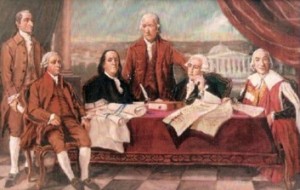 Treaty of Paris was an agreement to end the war between Britain and its American colonies.

The Treaty of Paris was formally signed on September 3rd, 1783 in Paris by representatives of the United States of America and King George III of Britain. It ended the war between America and Britain and recognized American independence and sovereignty.

Talks of peace negotiation began in April 1782 with the American victory at Yorktown, Virginia. This was a decisive and key victory for the Continental Army led by General George Washington and the French Army led by Comte de Rochambeau.

These preliminary negotiations were conducted behind France’s back as America and France had signed The Treaty of Alliance which stated that before either country embarked in any peace negotiations with Britain, they had to reach a mutual agreement. Consequently, America violated that clause of the Alliance and French minister Vergennes had to agree to separate negotiations as long as they were signed on the same day and did not conflict with one another. 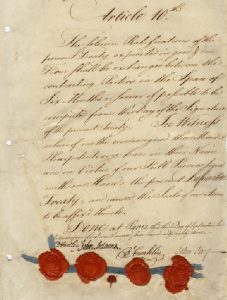 Article 10 of the Treaty of Paris. At the bottom are the signatures of the American representatives and their respective seals.

The final treaty was signed on September 3, 1783 in the Hotel d’York  located on 56 Rue Jacob. On the same day France, Spain and Netherlands signed separate agreements with Britain. These separate peace treaties between supporters of America and Great Britain is known as The Peace of Paris.

The American Continental Congress ratified the Treaty on January 14, 1784, France in March 1784 and Britain in April of the same year. The ratified versions were exchanged in Paris on May 12, 1784.

Read The Treaty of Paris transcription

Summary of the articles of the Treaty of Paris