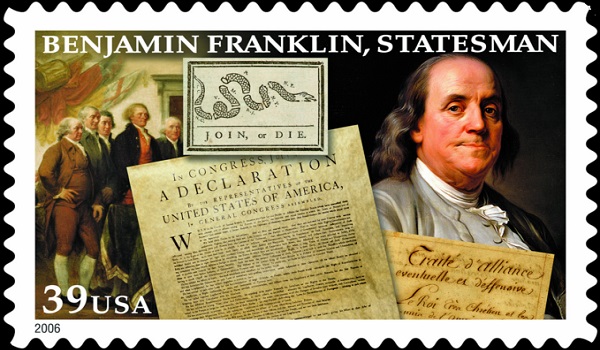 Franklin began his career as a postmaster general in 1737 and was dismissed in 1774.

Franklin’s postal career began in 1737 when he was appointed postmaster of Philadelphia. Franklin used his position to increase the circulation of his newspaper, the Pennsylvania Gazette, by allowing riders to carry it to subscribers.

In 1753 after the death of Elliot Benger, the Postmaster General, Franklin was appointed Postmaster General of America, a post he shared with William Hunter. During his employment he toured all the northern colonies to survey post roads and post offices establishing more efficient routes. He traveled a total of 1,600 miles. In order to improve delivery time he had riders carry mail during night and day.

Although Franklin did not invent it, he designed an odometer and attached it to the front wheel of the letter carriage, the odometer measured the number of revolutions of the wheel. Each revolution was counted by dials and by the end of the trip the mailman would know the distance traveled by multiplying the number of revolutions by the circumference of the wheel. That way Franklin determined which routes were the quickest. He determined postal rates based on distance and weight and were standardized for all colonies.  He also mandated the delivery of newspapers for a small fee. His improvements turned the American Post Offices profitable for the first time.

Franklin remained Postmaster General until 1774. After the Hutchinson Affair Franklin was judged too sympathetic to the colonies and was dismissed from his post.

The establishment of this organization represents the basis of what became the United States Postal Service.