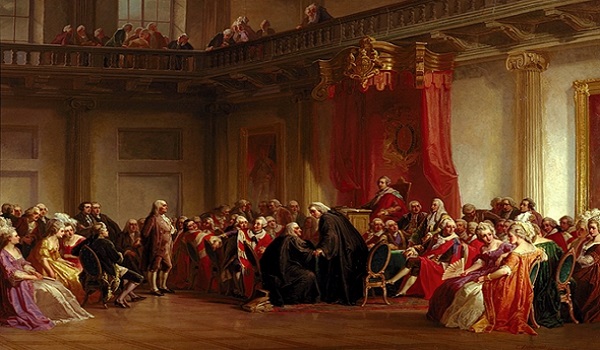 Franklin appeared before the Privy Council hearing of the Hutchinson Affair. Christian Schussele

Agent of the Pennsylvania Assembly to London 1757-1762 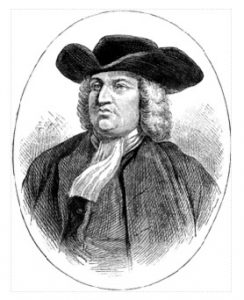 William Penn founder of the North American colony of Pennsylvania. He was an early advocate of religious freedom.

In 1757 Franklin was sent to London as an agent of the Pennsylvania Assembly to present grievances to the crown including the influence of the Penn family as proprietors of the province and a dispute on taxing proprietary estate. In 1681 King Charles II gave a large piece of  his American land holdings to William Penn as a debt payment due to Penn’s father. William Penn and his family were the proprietors of the entire Province of Pennsylvania.

The Assembly wanted the tax to include all proprietary estates including the Penn estates owned by the Penn Family. Some in the Assembly, including Franklin, wanted to free the colony from the Penn family and to make it a royal colony.

The Assembly manipulated Pennsylvania Governor William Denny into passing a bill that taxed the Penn estates to back the supply of paper money to pay for soldiers and equipment. The governor was told that Franklin would be able to get the Royal Council to uphold the bill. Meanwhile in England, William Penn sent a petition to disallow the bill arguing that the Assembly wanted to make Pennsylvania a democracy and that taxes on his estates would be exorbitant allowing the Assembly more money than needed.

The King Council judged the bill an assault to the crown and instructed Penn to uphold his rights. However, the bill was not repealed because the paper money to pay soldiers was already in circulation as a consequence the bill was conditionally confirmed.

In 1760 the King Council decreed that Penn estates were not to be taxed higher than other Pennsylvania inhabitants.

Agent of the Pennsylvania Assembly to London 1764-1775 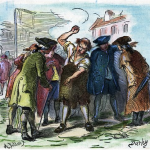 Denunciation of the Stamp Act. Woodcut by Darley

The Assembly, whose majority of members supported Franklin, voted to send him to London to assist agent Richard Jackson to protest new legislation imposed by the crown and designed to raise revenue in the colony, the Sugar Act and the Currency Act. Franklin also wanted to seek crown protection from the perceived abuse of proprietors. After the French Indian War Britain faced an increasing national debt and military protection of its colonies. In order to finance the defense of its American colonies and pay for war expenses, George Granville’s ministry planned on regulating trade with its American colonies as a source of revenue for the British Empire by implementing the Sugar Act and the Currency Act.

In 1765 the Stamp Act was proposed. It imposed a tax that required the purchase of a stamp to be affixed to a number of documents, newspapers, posters and even playing cards. The tax was payable in scarce silver and gold coins instead of the most common method, paper money.

The Massachusetts House of Representatives urged colonies to oppose the Stamp Act. The Pennsylvania assembly instructed Franklin and Jackson to oppose its passage and demand a modification of the Sugar and Currency Acts. They argued that only Pennsylvania had the right to impose taxes in Pennsylvania.

The Stamp Act passed the House of Commons on February 27 and was scheduled to take effect on November 1st. It never took effect as colonial opposition was too strong. Franklin up to that moment was considered a royalist. As Stamp Act protests spread through the colonies, Franklin’s house was threatened. His wife Deborah resisted fleeing the house which was protected by his supporters. Realizing that the majority of the population was resisting the taxation Franklin wrote several newspaper articles defending the colonies and supporting its repeal.

Meanwhile in America, the opposition met in the Stamp Act Congress in New York in October 1765 in what was the first attempt of a union. Nine of the thirteen colonies sent a total of 27 representatives. The Congress approved 13 resolutions including “No taxation without representation”. 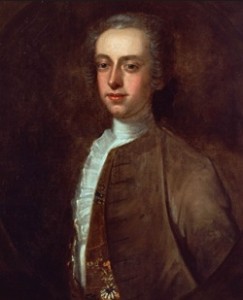 In 1773 Franklin made public letters between Massachusetts Governor Thomas Hutchinson and Lieutenant Governor Andrew Oliver with English authorities advocating repressive measures against agitators in the colonies. The letters were published in the Boston Gazette arousing a political revolt in Boston. Franklin was summoned by the Privy Council and accused of being a thief and dishonor. He was discharged of his role as Postmaster General of the colonies. In 1775 Franklin returned to America committed to the independence movement..

=> Read more about the consequences of the Huchinson Letters