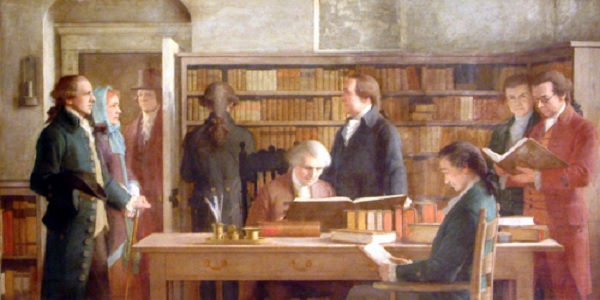 How did the Library Company start? 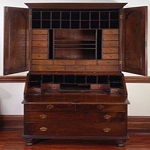 William Penn’s desk from the Library Company Collection. Penn was one of the most important benefactors.

The Library Company was officially founded on July 1st, 1731 when Benjamin Franklin and Junto Club members signed the articles of agreement to subscription.

In the 1700’s purchasing books in Pennsylvania was prohibitively expensive, one had to travel to New York or Boston. Only the clergy and the wealthy had access to books.

The idea to create a lending library started during Junto Club gatherings where each member would bring books to share with others and consult during debates but bringing books back and forth became cumbersome. It was agreed by the members to keep the books in the meeting room so that all members would benefit from them. It was also of great benefit to borrow a book and bring it home to read, therefore the idea of starting a public subscription library. Franklin’s goal was to benefit the common people who otherwise would not have access to books.

This excerpt from Franklin’s autobiography describes how the idea of a lending library started.

“About this time, our club meeting not at a tavern but in a little room of Mr. Grace’s set apart for that purpose, a proposition was made by me that, since our books were often referr’d to in our disquisitions upon the queries, it might be convenient to us to have them altogether where we met, that upon occasion they might be consulted; and by thus clubbing our books to a common library, we should, while we lik’d to keep them together, have each of us the advantage of using the books of all the other members, which would be nearly as beneficial as if each owned the whole. It was lik’d and agreed to, and we fill’d one end of the room with such books as we could best spare. The number was not so great as we expected, and tho’ they had been of great use, yet some inconveniences occurring for want of due care of them, the collection, after about a year, was separated and each took his books home again.

And now I set on foot my first project of a power of the Junto any way to encourage? public nature, that for a subscription library.” 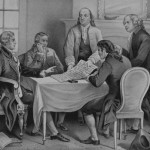 The Junto Club outgrew into the American Philosophical Society.

On July 1st, 1731 Junto members created the articles of agreement to subscriptions, set the payment for the first purchase plus an annual contribution. They started with 50 subscribers investing 40 shillings each and an annual contribution of 10 shillings going towards the purchase of new books to increase the library’s collection. Books were imported from England and the library was opened one day a week for lending. If a book was not returned on time, the fine was twice the value of the book. Due to its success the lending library was imitated by other towns and provinces.

The Library Company of Philadelphia 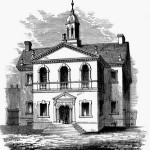 Carpenter’s Hall served as the de facto Library of Congress from the Revolutionary War until 1800.

The Library Company succeeded because it adapted to the needs of its non elite membership. It was an all embracing cultural institution which according to Franklin “these Libraries have improved the general Conversation of Americans, made the common Tradesmen and Farmers as intelligent as most Gentlemen from other Countries, and perhaps have contributed in some Degree to the Stand so generally made throughout the Colonies in Defence of their Priviledges.”

They ordered a variety of books from England including novels, poems, plays, history, travel and books from the field of practical arts and sciences. Another difference from college libraries was that 90% of the books in the Library Company were in English following Franklin’s focus on a good English education (College of Philadelphia) rather than classical education in Latin and Greek.

As the collection outgrew its original location they moved to the west wing of the State House, currently Independence Hall. Donations kept coming in and the library once again had to move. In 1773 they rented the second floor of a new hall from the the Carpenter’s Company off Chestnut Street near Fourth. The same building where the First Continental Congress took place on September 5, 1774.

The Library Company served as the Library of Congress from the Revolutionary War until 1800 when the nation’s capital was established in Washington DC.

In 1790 the Library Company moved again to a new building on Fifth St. below Chestnut. Today it is located at 1314 Locus St. The Library Company is an independent research library specializing in American history and culture from the 17th through the 19th centuries.