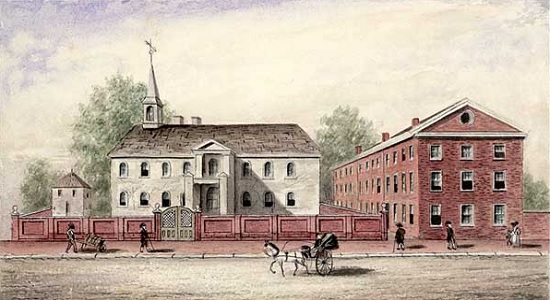 The University of Pennsylvania traces its roots back to 1749 when the Publik Academy of Philadelphia was opened. Benjamin Franklin saw a lack of comprehensive education for youth in Philadelphia and saw the need for an affordable, non sectarian and inclusive academy. New York and Boston had academies and colleges but Pennsylvania lacked one.

The first step Franklin took was to involve some Junto members in its design. Next, in order to advertise and raise funds, he published an influential pamphlet with the title “Proposals relating to the education of Youth in Pennsylvania”. They accepted donations in quotas for 5 years and The Publik Academy of Philadelphia was opened in 1749. 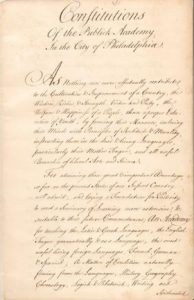 Constitution of the Publik Academy of Philadelphia 1749

Franklin’s vision was to educate local leaders needed for a growing city, to educate the future business and governing class. The curriculum was different from the other established academies in New England and Virginia. Courses were designed to be practical and would focus more on modern necessities such as business and commerce; classes would be taught in English rather than Latin or Greek. The academy was non sectarian, a first in colonial America. Its Board of Trustees was composed of Quakers, Anglicans, Presbyterians and agnostics to ensure that no one denomination would dominate. Existing academies and colleges were founded to educate the clergy and were sectarian. Higher education institutions such as Harvard College and Yale were founded by Puritans, Princeton by Presbyterians, College of Rhode Island (Brown University) by Baptists and King’s College (Columbia) by Anglicans.

Students enrolled and soon the building was too small. The trustees of the academy sought a building that was abandoned due to lack of funds and which was built by donations taken by a prominent Evangelical, George Whitefield. The building was to be a non-denominational place of prayer and a school for working class Philadelphians.

The trustees of the academy were incorporated by a charter from the governor and funding was received from Britain and land grants from their owners.