Treaty of Alliance with France signed on February 6, 1778 at the Hôtel de Crillon in Paris.

In November 1775 the Continental Congress created the Committee of Secret Correspondence to communicate with sympathetic Europeans and seek their support. Agents had the authority to conduct international diplomacy which in this case included aid for the independence cause. In April 1777 Congress renamed it Committee of Foreign Affairs.

The French government was already supporting America in a smaller scale before Franklin arrived. Franklin joined Silas Deane, a trader and secret agent who was on a mission to seek money, ships and personnel from the French government.  Franklin was a well known man in Europe, in fact he was the best known American in the world. He was particularly admired in France, a country that first recognized his experiments as ground breaking while the British dismissed them but later they came to recognize its importance. Franklin was charismatic and had a magnetic personality even though his French was not perfect.

At the time the world had two superpowers, France and Britain. The French were defeated by the British with the help of the colonies in the Seven-Year War and lost North American territory. To France supporting American independence was a way to get back to Britain without being involved in a direct war. America gained a valuable ally with a powerful military.

On December 28, 1776 Franklin had his first meeting with French Foreign Minister, Charles Gravier, Compte de Vergennes. The French had already supplied war equipment and funds but Franklin asked for more to defeat Britain. He also wanted France to sign a treaty with America but France was reluctant as it meant direct confrontation with Britain which could bankrupt the French government as the success of the Continental Army was uncertain.  By the time this meeting took place Washington had lost the Battle of Long Island and the attempt to take Canada had failed.

The Continental Congress sent a third agent, Arthur Lee, to help Franklin and Deane with negotiations with the French. Franklin tried to keep the American Revolution cause alive in Paris, negotiations lasted two years until the Continental Army defeated the British at Saratoga, New York. In November the British service agent Paul Wentworth approached Franklin with a proposal for reconciliation. At this point Vergennes agreed to a treaty with the United States.

Treaty of Alliance and Treaty of Amity and Commerce 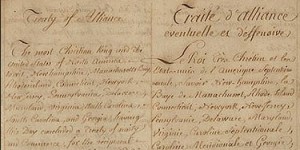 The Treaty of Alliance and the Treaty of Amity and Commerce were signed on February 6, 1778 and approved by Louis XVI, King of France, in March of the same year.

The Treaty of Alliance called for mutual defense in case France or the Union was attacked by the British. One of the clauses in the treaty specified that neither country could seek a separate peace agreement with Britain.

The Treaty of Amity and Commerce promoted trade and commercial ties between the two countries. It allowed the presence of consuls and recognized the United States as an independent nation. This treaty was based on the Model Treaty prepared by John Adams in 1776 which protected trade and shipping rights in the event of war but did not call for mutual defense.

Once the treaty was signed Spain joined the war. This alliance was one of Franklin’s most important achievements which led to French military aid, fundamental in the fight against Britain.

Before the Treaty of Alliance was signed Franklin arranged for the translation and publication of the constitutions of the thirteen states and founding documents. He presented them to the French King and ministers. The Great Seal of the United States made its first printed appearance in this publication.

After the treaty was signed Franklin was made minister plenipotentiary to France and the sole representative of America in France.