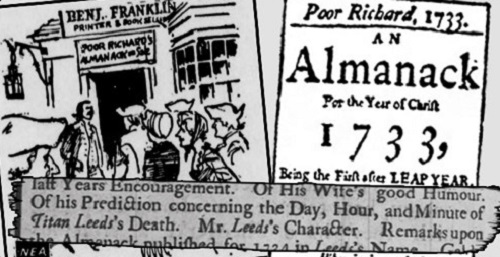 Franklin’s greatest business accomplishment came from the publication of Poor Richard’s Almanack. On December 19, 1732 Franklin published his first almanac under the pseudonym of Richard Saunders. The almanac was published for the year of 1733 and was published once a year for the next 25 years. It contained all sorts of interesting information such as the calendar, weather predictions, sayings, poems and demographics. It also included recipes, trivia, advice, aphorisms, and proverbs about industry and frugality. Franklin considered it a vehicle of instruction for common people who could not afford books, a literature for the masses. Almanacs were the most read secular books in the colonies.

Almanacs were produced in Britain long before they made their way to North America. The first almanac in North America was published by William Pierce of Harvard College in 1639 in Cambridge, Massachusetts. The most important were published in New England by Nathaniel Ames of Dedham, Massachusetts, its publication lasted from 1726 to 1775. Benjamin Franklin’s brother, James, also published the Rhode-Island Almanack starting in 1728.

The oldest almanac still in circulation in North America is the Old Farmer’s Almanac first published in 1792 by Robert B. Thomas.

According to the Library Company of Philadelphia only three copies of the 1733 original issue exist. The third copy was found in 2009 in the library of the Berwick Historical Society in Pennsylvania. Here in Berwick, an old industrial town, Franklin printed thousands of copies of his calendar from 1733 to 1760. This original issue was sold in auction by Sotheby’s fetching $556,500.

A 1733 edition of Poor Richard’s Almanac

The success of Poor Richard’s Almanack is due in part to Franklin’s ability to adapt bits and pieces of past calendars with his own skills and wit.

Poor Richard’s Almanack was not all serious business, it published jokes and hoaxes. It is believed that Richard Saunders’ personality was modeled after Isaaq Bickerstaff Esq, a pseudonym used by Jonathan Swift as part of a hoax to predict the death of almanac writer John Partridge. One of Franklin’s most famous hoaxes The Death of Titan Leeds (see below) was based on this hoax.

The almanac was a best seller in the American colonies printing up to 10,000 copies a year. Its success brought wealth to Benjamin Franklin. Poor Richard’s Almanack was so popular that Napoleon ordered it translated into Italian and later it was also translated into French.

Richard Saunders introducing himself in his first 1733 almanac:

The death of Titan Leeds

In his first edition Franklin predicted the death of Titan Leeds, a competitor publisher of another calendar. In replicating Swift-Bickerstaff  hoax Franklin predicted Leed’s death on Oct. 17, 1733, 3:29 P.M., at the very instant of the conjunction of the Sun and Mercury. He advised his readers to buy the next issue of his calendar to see if his prediction held. When the date of his predicted death arrived and Leeds had not died, Franklin nevertheless published his obituary. When confronted by Leeds Franklin proclaimed that someone had appropriated his name and was being impersonated by an inferior printer.

For the next years he continued to affirm that Leeds had died until 1738 when he actually passed on. Franklin congratulated the person who had usurped Leeds name for finally ending his pretense.