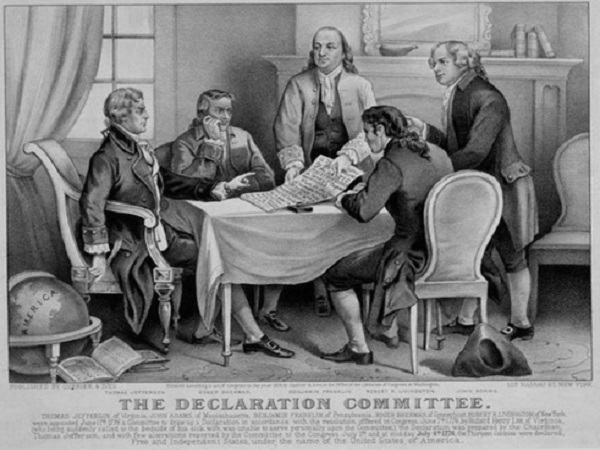 The Committee in charge of drafting the Declaration of Independence: delegates John Adams of Massachusetts, Thomas Jefferson of Virginia, Robert R. Livingston of New York, Roger Sherman of Connecticut and Benjamin Franklin of Pennsylvania.

After the Hutchinson Affair in 1773 English authorities accused Benjamin Franklin of treason. He was consequently relieved of his post as Postmaster General  and decided to return to America to continue his fight for independence. At the advanced age of 70 and with poor health he continued his involvement in politics and in congress.

The conflict between Britain and its colonies in America had escalated beyond just taxation. The colonies were looking for representation in the British Legislature but were denied that right. They knew they would be better off by governing themselves, they were growing more confident as they created liaisons in Europe.

Franklin was back in America in May 1775  shortly after the Concord and Lexington Battles in Massachusetts. Colonies joined forces and met at the Second Continental Congress in Philadelphia in June 1776 to manage war efforts and set the stage for independence. Franklin was elected Pennsylvania delegate to the Congress.

Franklin participated in several committees of Congress. He served in a committee to create paper currency, the new Continental currency. Franklin also headed a committee to organize the new American post office which was to run parallel to the British post, he was made Postmaster General. He was also part of the committee that created policies and rules of the Continental Army. Franklin was an advocate of free trade and submitted a resolution proposing free trade among colonies with no duties whatsoever. The resolution was adopted with proviso that individual colonies could impose their own import duties. By the end of 1775 Franklin was also appointed to the committee of secret correspondence to deal with foreign affairs and start gathering support from Britain’s enemies.

As colonies demanded more independence they arrived to the conclusion that they could not reach an agreement with Britain. The colonies were economically tied to Britain and needed commercial agreements with other European countries. The only way Europeans would sign trade agreements was if America was recognized as an independent country.  In June 1776 a motion was made in Congress for a Declaration of Independence. Franklin was part of the five-member committee that drafted the Declaration of Independence, other members were John Adams of Massachusetts, Thomas Jefferson of Virginia, Robert R. Livingston of New York and Roger Sherman of Connecticut. The Committee of Five presented the document to Congress on June 28, 1776. Thomas Jefferson wrote the first draft which was submitted on July 2, that same day Congress voted in favor of Richard Henry Lee’s motion for independence. On July 4 the Continental Congress approved the wording of the document which was sent to print.

John Hancock, president of Congress, was the first to sign the document. Other delegates signed on August 2 and the last person to sign was Matthew Thornton, New Hampshire delegate.

At the end of 1777 delegates of congress formulated the Articles of Confederation which was unanimously ratified by all colonies. It established a central government in a more permanent union of states and a unified foreign policy.