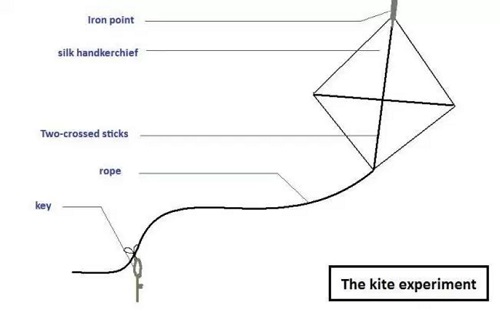 Flying a kite in a storm was perhaps Benjamin Franklin’s most famous experiment that led to the invention of the lightning rod and the understanding of positive and negative charges. The connection between electricity and lightning was known but not fully understood. By conducting the kite experiment Franklin proved that lighting was an electrical discharge and realized that it can be charged over a conductor into the ground providing a safe alternative path and eliminating the risk of deadly fires. 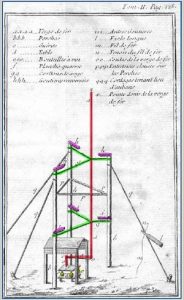 Franklin hypothesized that lightning was an electrical discharge. Before he thought of conducting his experiment by flying a kite, he proposed erecting iron rods into storm clouds to attract electricity from them. He also suggested that the tips of the rods should be pointed instead rounded so that they could draw electrical fire out of a cloud silently. Franklin speculated about its usefulness for several years as he was unable to perform his experiment since he thought it had to be  conducted from a higher ground. Philadelphia has a flat geography and at the time there were no tall structures, he was anxiously waiting for the construction of Christ Church that was being built on a steeple to conduct his experiment.

Franklin wrote his proposal for the iron rod experiment in a letter to Peter Collison who was a member of the Royal Society of London. Collison presented Franklin’s hypothesis to the Society who ridiculed and laughed at his idea failing to recognize its significance. A year later when the French translation was published it attracted the interest of French scientists Delor and Dalibard, who separately and successfully conducted Franklin’s experiment calling it the “Philadelphia experiment”.

Franklin was recognized by the Royal Society of London and in scientific circles all over Europe, becoming the most famous American in Europe. 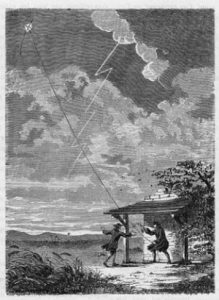 Franklin kept himself and the end of the string dry to protect himself from being electroshocked.

Franklin had not heard of the success of his experiment in Europe before he conducted the same experiment with a kite. One day in June 1752, it occurred to him that he could test his hypothesis by flying a kite instead of waiting for the church to be built. With the help of his son William he built the body of the kite with two crossed strips of cedar wood and a silk handkerchief instead of paper as it would not tear with wind and rain. They attached a foot long sharp and pointed wire to the top of the kite as a conductor and at the bottom end of the string where it is held they attached a silk ribbon and a metal key. A metal wire connected the key to the Leyden Jar.

Franklin kept dry by retreating into a barn; the end of the string was also kept dry to insulate himself. When the stormed passed over his kite the conductor drew electricity into his kite. The kite was not struck by lightning but the conductor drew negative charges from a charged cloud to the kite, string, metal key and Leyden jar. It appears that he knew enough about grounding to protect himself from being electroshocked. When he moved his hand near the key he received a shock because the negative charge attracted the positive charge in his body.

This is the description of the electric kite experiment in Franklin’s own words from the Pennsylvania Gazette dated October 19, 1752.

As frequent Mention is made in the News Papers from Europe, of the Success of the Philadelphia Experiment for drawing the Electric Fire from Clouds by Means of pointed Rods of Iron erected on high Buildings, &c. it may be agreeable to the Curious to be inform’d, that the same Experiment has succeeded in Philadelphia, tho’ made in a different and more easy Manner, which any one may try, as follows.

Make a small Cross of two light Strips of Cedar, the Arms so long as to reach to the four Corners of a large thin Silk Handkerchief when extended; tie the Corners of the Handkerchief to the Extremities of the Cross, so you have the Body of a Kite; which being properly accommodated with a Tail, Loop and String, will rise in the Air, like those made of Paper; but this being of Silk is fitter to bear the Wet and Wind of a Thunder Gust without tearing. To the Top of the upright Stick of the Cross is to be fixed a very sharp pointed Wire, rising a Foot or more above the Wood. To the End of the Twine, next the Hand, is to be tied a silk Ribbon, and where the Twine and the silk join, a Key may be fastened. This Kite is to be raised when a Thunder Gust appears to be coming on, and the Person who holds the String must stand within a Door, or Window, or under some Cover, so that the Silk Ribbon may not be wet; and Care must be taken that the Twine does not touch the Frame of the Door or Window. As soon as any of the Thunder Clouds come over the Kite, the pointed Wire will draw the Electric Fire from them, and the Kite, with all the Twine, will be electrified, and the loose Filaments of the Twine will stand out every Way, and be attracted by an approaching Finger. And when the Rain has wet the Kite and Twine, so that it can conduct the Electric Fire freely, you will find it stream out plentifully from the Key on the Approach of your Knuckle. At this Key the Phial may be charg’d; and from Electric Fire thus obtain’d, Spirits may be kindled, and all the other Electric Experiments be perform’d, which are usually done by the Help of a rubbed Glass Globe or Tube; and thereby the Sameness of the Electric Matter with that of Lightning compleatly demonstrated.

In 1753 Franklin published an article in Poor Richard’s Almanac describing how to secure houses from lightning.