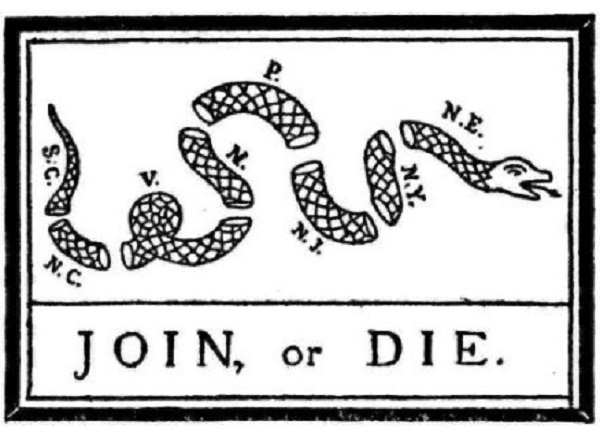 The snake cartoon was cut into pieces and labeled with the initials of each colony. It was first printed on May 9, 1754 in the Pennsylvania Gazette.

By 1748 Franklin had built a fortune from his printing business which allowed him to live comfortably for the rest of his life. His business partner, David Hall, was left in charge of his business. With the extra time in his hands he was able to invest more time in his public projects and scientific experiments.

Franklin was called into almost every branch of public life. In 1748 the governor of Pennsylvania chose him to the Commission of the Peace and the city elected him to the Common Council. In 1753 he was elected to represent the citizens in the Pennsylvania Assembly. He was grateful for the post as he confessed that he was tired of listening to the debates as a clerk, position he held since 1736, without the privilege of taking part in them. He was elected for the next consecutive 10 years until he moved to Europe. 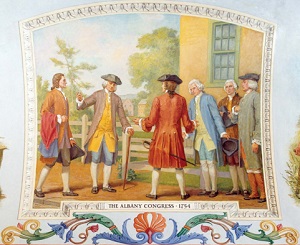 In 1754 Franklin was appointed by the Assembly to head the Pennsylvania delegation to the Albany Congress regarding the defense of the colonies against France during the French Indian War. This was requested by the Board of Trade of England to improve relations with Indians.

Franklin proposed a plan for the union of all colonies but the British government did not approve. He created the famous snake cartoon titled “Join or Die”. The snake was cut into pieces and labeled with the initials of each colony, it was first printed on May 9, 1754 in the Pennsylvania Gazette. Ironically, a decade later the cartoon became a symbol of colonial rebellion against Britain.

Britain was afraid that the colonies might grow too military and trust their own strength against them. However, they agreed they could raise troops and build forts which were to be paid by the government of Britain through a tax on America.

Agent of the Pennsylvania Assembly to London 1757-1762 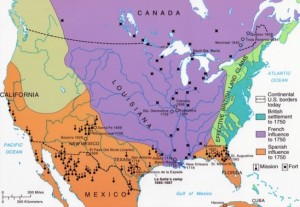 Franklin was sent to London to support a bill with the Royal Council that included the taxation of the Penn estates to raise money to pay for soldiers and expenses incurred by the province during the French Indian War. William Penn owned most of the land in the province which was exempted from taxes, he also appointed its governor. During his stay in London Franklin lobbied for a royal governor instead of a proprietary based one.

Benjamin Franklin’s experiments with electricity and his various inventions made him well known in England which brought him to members of government and connected individuals.

Speaker of the Assembly 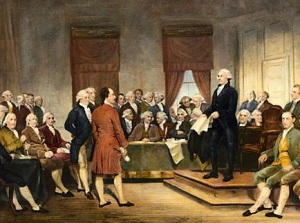 Franklin wanted a governor appointed by the crown and not a proprietor governor such as Penn family members.

In 1764 Franklin was elected Speaker of the House. During this term he led an anti-proprietary movement in the Assembly against the Penn family.

Franklin wrote “Cool Thoughts” in which he supported a royal governor instead of a property based governorship. Some thought Franklin’s intention was to become governor himself. In March 1764 Assembly members gathered to sign a petition demanding a royal governor. The petition circulated at mass meetings and small gatherings but it was only signed by 3,500 people out of a population of 250,000. This was a defeat for Franklin. Few Pennsylvanians signed the petition because they feared that a change in government might risk civil and religious liberties granted by Will Penn’s Charter of Privileges of 1701.

Penn family supporters mobilized the province’s Germans against Franklin claiming that he had once insulted them. Pennsylvania’s Presbyterians were also on Penn’s side. During the Assembly election of 1764 Benjamin Franklin was defeated.

Agent of the Pennsylvania Assembly to London 1764-1775

Denunciation of the Stamp Act. Woodcut by Darley

After Franklin failed to be elected to the Assembly, he was chosen as an agent to represent the province in London and join Pennsylvania agent Richard Jackson. He was to assist Jackson in protesting new trade legislation, the Sugar Act, Currency Act and Stamp Act.

In 1768 Franklin was appointed colonial agent of Georgia, in 1769 of New Jersey and in 1770 of Massachusetts.

In 1773 Franklin leaked correspondence, known as the Hutchinson Letters, from Massachusetts Governor Thomas Hutchinson and Lieutenant Governor Andrew Oliver with English authorities. In these letters the governor advocated repressive measures against agitators. He sent the letters to Samuel Adams who was the head of the Massachusetts Committee of Correspondence. Against his will the letters were published in the Boston Gazette provoking fierce protest in Boston.

In January 1774 Franklin was accused of treason and dishonor by the Privy Council. He argued that what he did was not illegal as they were not private letters but were written by public officers regarding public affairs. Franklin was discharged of his post as Postmaster General.

Early 1775 he returned to America committed to the independence movement.