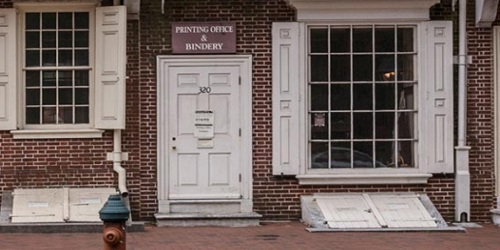 Benjamin Franklin’s journey in the printing business started long before he started working in the printing presses of Philadelphia. As a child he worked for this brother James in Boston as an apprentice. James published the New England Courant, a well known publication and the first American newspaper to use literary content and humorous essays. Franklin’s first published letter was in the Courant under the pen name of “Silence Dogood”. Franklin dreamed of opening his own printing and publishing shop. He asked his father for the investment capital but he thought Ben was too young to be trusted with a huge sum of money.

In 1724 Benjamin Franklin left Philadelphia, advised by Governor Keith, to buy printing equipment in London. Unfortunately the governor could not produce the necessary documentation and letter of credit for Franklin to purchase the equipment and was left stranded. In order to make ends meet and save for his return home he took jobs in printing shops where he learned the latest in printing technology without knowing that the skills he was acquiring were in high demand in America. In 1726, after spending 18 months in England Franklin arrived at Philadelphia in a voyage that lasted almost 2.5 months.

Back in Philadelphia he continued his employment with Thomas Denham, who had loaned him money to return to America. He worked as a shop keeper and accountant. Suddenly both fell ill. Franklin suffered his first attack of pleurisy but recovered; Denham was not so lucky and passed away. Read more about Franklin\’s journey in London. 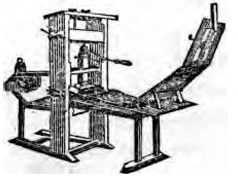 Franklin briefly returned to work for Samuel Keimer, the founder of the Pennsylvania Gazette, who was in a great deal of debt. Keimer was given a project that involved printing money in New Jersey. It involved skills in cutting and types that only Franklin could supply as no one had the skills. The copper press plate was the first one ever used in the country. For three months while at this job Franklin met friends in positions of power such as Judge Allen, Samuel Bustill, the Secretary of the province; Isaac Pearson, Joseph Cooper, members of the Assembly and Isaac Decow, the surveyor general. These people would eventually shape the events of his life and contribute to his wealth. 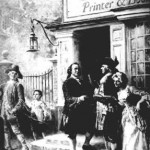 In 1728, when Franklin was 22 years old, he entered a partnership with Hugh Meredith, a co-worker at Keimer’s Printing Shop. With a loan from Meredith’s father who had a high regard for Franklin they were able to rent a house and import printing equipment from England. His printing skills were set against the loan and profit would be shared equally. Their first customer was a farmer referred by a friend.

Franklin was industrious, disciplined and hard working. Printing was a labor intensive activity and when required he stayed until late night while his partner Meredith had taken to drinking. Meredith’s father had paid only half of what they owed for the equipment and creditors were demanding payment. Two friends offered their help but only if he let Meredith go. Fortunately, Meredith realized that he was better off returning to what he really liked doing, farming. Franklin bought his share of the business and became the sole owner.

On October 2, 1729 Franklin seized the opportunity to purchase the Pennsylvania Gazette from his former boss, Samuel Keimer. Under Franklin The Gazette became the most successful newspaper in the colonies. Another successful publication that brought wealth to Franklin was Poor Richard’s Almanak. It was published continuously from 1732 to 1758. However, the most profitable business was becoming the official printer of Pennsylvania in 1730 and of New Jersey in 1740.

By the early 1730s Franklin wanted to expand his business beyond Philadelphia. His idea was to expand by promoting his best workers and setting them up with a printing shop. He would pay for the rent and provide the printing equipment in exchange for one third of the profits for period of 6 years and the partner would provide the labor. At the end of the 6-year term the partner had the option to work independently by purchasing the equipment from Franklin or maintain the partnership. Franklin had founded the first commercial franchise system in the Americas. Read more about how Benjamin Franklin franchised is business.

In 1748 Franklin decided he wanted to spend all his time in science and public projects. He left his printing business to his partner David Hall who also edited and published the Pennsylvania Gazette and Poor Richard’s Almanac.