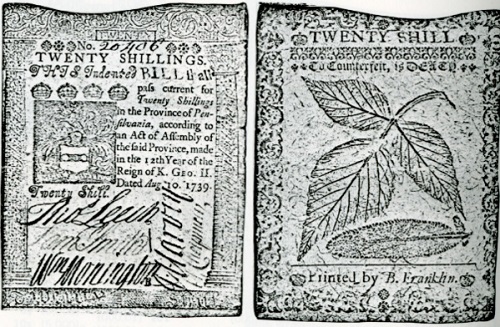 Paper currency printed by Franklin in 1739

Printing for the colonial government was by far the most profitable printing business for Franklin, being paper currency or official government forms. Paper money was first introduced in the Pennsylvania in 1723. Farmers and tradesmen were greatly benefited but landowners and merchants wanted it eliminated or limited as its value was subject to depreciation.

Colonial economy depended largely on British coins but they were very scarce, it also depended on barter and bills of credit. The first colony to issue its own colonial currency was Massachusetts in 1690. 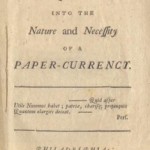 The first part discusses the importance of an adequate supply of money for the success of the business community.

In 1729 as the economy of Pennsylvania was improving in part due to increased circulation of paper currency, Franklin wrote “The Nature and Necessity of a Paper Currency”.  In this essay he supported and gave evidence of its positive effect in the economy while warning on excessive printing. His opinion was that silver and gold are not the true measure of a nation’s wealth but the labor its inhabitants are able to purchase. It argued for a bill to increase the supply of paper money.

The essay was very popular and helped persuade the legislature to pass the bill and increase circulation of paper money. His friends at the legislature supported his bid for the job of printing money but it was given to William Bradford. Bradford had been the printer for New York since 1693 and New Jersey since 1702. However, the following year, 1730, the job was given to Franklin becoming the official printer of Pennsylvania.

In 1736 Franklin signed a contract to print money for New Jersey and became its official printer in 1740.