Benjamin Franklin’s inventions were practical and designed to make everyday life easier. He never patented any of his inventions, likely costing him a fortune. He considered them a gift to the public. In his autobiography he wrote: “As we enjoy the advantages from the inventions of others, we should be glad of an opportunity to serve others by any invention of ours; and this we should do freely and generously”.

Franklin loved swimming. When he was 11 years old he invented swimming fins. It was his first documented invention, he made a pair of oval wooden planks with holes in the center. By grasping the planks with his hands they gave him extra thrust when swimming. He also tried to strap boards in his ankles but found them clunky.

Franklin wrote in his autobiography:

“When I was a boy, I made two oval palettes, each about 10″ long and 6″ broad, with a hole for the thumb in order to retain it fast in the palm of my hand.  They much resembled a painter’s palette.  In swimming, I pushed the edges of these forward and I struck the water with their flat surfaces as I drew them back.  I remember I swam faster by means of these palettes, but they fatigued my wrists.  I also fitted to the soles of my feet a kind of sandals, but I was not satisfied with them because I observed that the stroke is partly given by the inside of the feet and the ankles, and not entirely with the soles of the feet”.

For his contribution to the sport Franklin was posthumously indicted into the International Swimming Hall of Fame.

When in London he saw for the first time musical glasses by which glasses were arranged on a table, rubbed around the rims with wet fingers to produce musical notes. To tune them water had to be poured over them to obtain the right notes.

Franklin though he could improve the experience of playing music with glasses. He arranged the glasses according to size and fixed them on a spindle. The spindle was set on a case and turned by a wheel. He called it the armonica and became very popular in its day. Mozart and Beethoven composed for it. 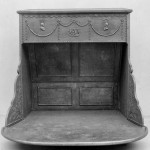 In 1742 Franklin invented the Franklin Stove also known as the Pennsylvania Fireplace.

Fireplaces were the main source of heat in the 18th century. They were inefficient and dangerous as they consumed a lot of wood, produced a lot of smoke and sparkles that could cause fires. Franklin was curious as to where the air that went up the chimney came from. He created an open stove made of cast iron, he then sought a method to make it more efficient by recirculating the hot air within the house through an inverted siphon and providing the fireplace with direct access to outside air. In addition to creating a stove that needed less amount of wood he created a safer stove that prevented fires.

He wrote a pamphlet explaining its functions “An account of the new-invented Pennsylvania fire place”. He was offered a patent for the right to sell it for one entire year but declined from principle. 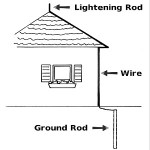 Franklin speculated about the usefulness of lightning rods for several years, since Philadelphia has a flat geography he was waiting for the Christ Church to be built so that he could complete his experiment. One day it occurred to him that he could conduct the experiment by flying a kite.

In his Poor Richard’s Almanac of 1753 he describes how to secure houses from lightning. 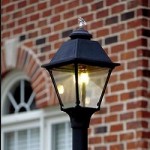 Street lamps supplied by London were round globe shaped lamps where air could not circulate letting smoke accumulate obstructing the light. Cleaning proved too time consuming and they were too fragile that an accidental stroke would demolish it.

Franklin proposed an idea he saw at a neighbor’s house, Mr. John Clifton. He suggested making street lamps of four flat panes with a long funnel above to draw up the smoke and crevices below to allow air. This way they were kept clean and the city would be well illuminated. He also discovered that two wick tubes burning side by side a certain distance apart gave more light than two separate burners. Whale oil was used as fuel. 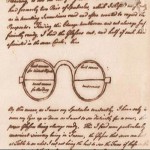 Benjamin Franklin noticed that the glasses needed to see at distance were not proper for reading as they required different optical powers. He had two pairs which he switched regularly when he needed to read but found it troublesome. He therefore had the glasses cut in half and each half was glued to the half of the other pair. By this means he did not have to change spectacles constantly and only move his eyes up or down as he want to see far or near. 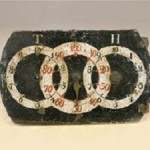 The odometer has been around since ancient times; Franklin did not invent it but adapted it in a way that had not been used before. Franklin became Postmaster General in 1753 and sought to improve the post office service and make it more profitable. He travelled often from Philadelphia to Boston and wanted to find the quickest route for the delivery of letters.

Franklin determined which routes were the quickest. He determined postal rates based on distance and weight and were standardized for all colonies. His improvements turned the American Post Offices profitable for the first time. 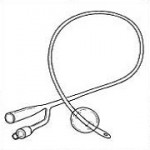 The flexible urinary catheter was invented by Benjamin Franklin in 1752 when his brother James suffered from bladder stones. He improved on conventional catheters which had rigid tubes that had to be inserted into the bladder to drain urine. He substituted his brother’s catheter with a flexible tube which was less painful to insert.