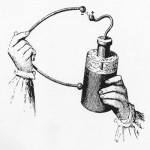 Franklin discovered positive and negative electric charges by conducting experiments with electricity using the Leyden Jar. He proved his theory by performing his kite experiment during a storm. When the stormed passed over his kite the negative charges passed into his kite, to the key and to the Leyden jar. When he moved his hand near the key he received a shock because the negative charge attracted the positive charge in his body. He documented all his findings in letters written to friends in Britain that were at a later time assembled into a book “Experiments and Observations on Electricity Made at Philadelphia in America”.

His discovery of positive and negative electric charge led to the invention of batteries by Volta and the electric motor. 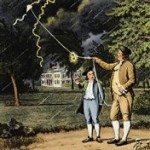 Flying a kite in a storm was perhaps Franklin’s most famous experiment that led to the invention of the lightning rod. Electricity had been known for thousands of years but not fully understood.

Franklin speculated about the usefulness of lightning rods for several years. Since Philadelphia has a flat geography he was waiting for the Christ Church to be built so that he could complete his experiment. One day it occurred to him that he could conduct the experiment by flying a kite. With the help of his son William he attached a metal key to the string of the kite connected to a Leyden jar so that it could accumulate electricity. He kept dry by retreating into a barn, the end of the string was also kept dry to insulate himself. The kite was not struck by lightning but it drew electricity to the key and Leyden jar. It appears that he knew enough about grounding to protect himself from being electro shocked.

When the stormed passed over his kite the negative charges passed into his kite, to the key and to the Leyden jar. When he moved his hand near the key he received a shock because the negative charge attracted the positive charge in his body. This experiment also led to the discovery of positive and negative electric charges. 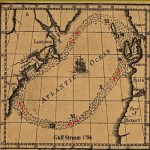 Franklin became interested in the North Atlantic Ocean circulation pattern while on a trip to England. He knew that trips from America to England took an average of two weeks longer than trips from England to America.

The presence of the Gulf Stream had been known since Spanish sailors reached the Americas but it was not mapped until Franklin took interest in it.

Franklin’s cousin, Timothy Folger, who was a Nantucket whaling captain, helped him record the stream. The map was published in 1786 with notes and observations. 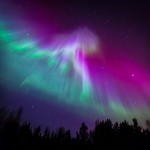 During his trips across the Atlantic, Benjamin Franklin often observed the Northern Lights also known as Aurora Borealis. His explanation was that the lights were caused by a concentration of electrical charges in the North Pole that intensified by the snow and moisture. As the area became overcharged with electricity power released into the air caused illumination. Franklin was correct about the Northern Lights caused by electricity but it was Kristian Birkeland, a Norwegian scientist, who developed a full theory. For a full explanation see Northern Lights Center from the Yukon Territories, Canada. 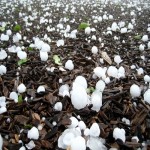 On October 21, 1743 while Franklin was planning to observe a lunar eclipse in Philadelphia, a storm moved in and covered the moon. He observed that the winds were moving from the northeast. His brother wrote to Benjamin that he had observed the eclipse and that the storm had not reached Boston until after the eclipse. This puzzled Franklin as the winds were coming from the northeast and Boston is northeast of Philadelphia. He continued gathering information and observed that storms have the ability to move in the opposite direction of the wind. He explained this phenomenon by the existence of high and low pressure. This was one of the first accurate explanations of movement of storms in the Atlantic Northeast which assisted in predicting weather patterns.

He was also puzzled by hail in summer. He correctly deduced, but had no way to prove, that the air at high altitudes of the atmosphere was colder than the air below it, allowing rain to freeze before hitting the ground. 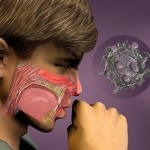 Before the discovery of germs and viruses people believed that colds were caused by wet clothing and dampness in the air. Franklin observed that sailors were usually wearing wet clothing but did not catch colds. After years of observation he concluded that colds are passed from people to people when they are in close contact such us in the same small room. 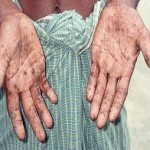 Benjamin Franklin observed from the printing business that people who handled warm lead types suffered from sore hands, some of them loosing movement of them. He was one of the first to observe the link between lead and health issues.